The beginner’s guide to ultimate throws

For new players, the sheer array of ultimate throws can be overwhelming. A disc is capable of many more variations in flight path than a ball, and beginners may not know what they can or should be throwing or learning. Here, I’ll talk you through the major throws used in ultimate, including all the lingo, so that you can put a name to that stunner the pros threw on the ESPN highlights last night.

Of all the multitude of ultimate throws, the good old backhand is still a key component. This is the throw new players are likely to revert to naturally – fingers curled under the rim and the disc spun forward with a flick of the wrist, just like badminton, table tennis or whipping someone with a wet towel – we’ve all done it! For ‘proper’ form and game effectiveness, you’ll want to be comfortable throwing from a wide pivot (for right handers, the default assumption for this article, this means keeping your left foot planted and stepping out to your left, across your body) with a variety of release heights. Tilt the top of the disc towards you to throw an outside in (known as an OI, roll edge, or roll) flight path which will curve away from the line of your body and then back in. This shape is great for throws from the left hand side of the pitch, which fly out of play, away from any defenders, only to drift back infield nearer the endzone. Conversely, tilting the top of the disc away from you will give a throw that crosses the line of your body to the right of the pitch before arcing back into the centre – the inside out or IO. The backhand is the ‘workhorse’ of ultimate – good for any throw from two yards to pitch-length. The pull, thrown to the other team at the start of each point, will usually be a backhand.

Also known as the flick or sidearm, the forehand is often the first new throws beginners will want to learn, and with good reason: many teams will ‘force forehand’ – marking the player with the disc such that it is the easiest throwing option. This is done as backhands can generally be thrown further and are easier for newbies, but the 80 yard flicks of the top players prove that tactic will only work for so long. Forehands are thrown with one or two fingers alongside the inside edge of the rim, imitating a gun shape, and again are propelled through a forward flick of the wrist. Step out to your right to ensure a wide release away from your marker. Like the backhand, outside in and inside out variations are possible to give curved flight paths that will enchant fans and avoid defenders! 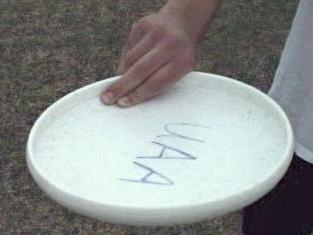 A classic power forehand grip. The spin is generated by the wrist and two fingers

The highlight heavy helix! The hammer is the most common overhead throw in ultimate. Thrown with a forehand grip but with the disc overhead and beyond vertical, it gives a high flightpath that curves from left to right and can make for defence-shattering plays. If you see the opposition playing a zone defence on an aggressive offensive team, expect this high-risk, high-reward throw to come out. As they’re thrown over the mark, hammers are also devastating ways to attack the ‘break side’ of the field, the lateral half downfield defenders are furthest from, leading to big gains in flow and easy scores. Coaches and captains beware – beginners inevitably fall in love with hammers, and will throw them as soon as they’re taught them, regardless of completion rates!

Not a throw in itself, but a key descriptor when recounting big plays, a huck is a long pass ripped downfield. Also called a bomb or deep shot, it is a lower percentage option than a shorter ‘underneath’ pass to a receiver approaching the thrower, but leads to the sort of highlight grabs that litter internet coverage and post-tournament boasts.

The above options will cover well over 90% of the ultimate throws you will see, and use, in matches. In my next article, I’ll look at some higher level, more unusual throws – these are the ones that make viewers rewind the footage and commentators gasp, “did he really just throw that?”

Advanced Throws in Ultimate: What the Pros Throw
January 1, 1970

Ultimate Throws: The Basics of Throwing

The beginner’s guide to ultimate throws For new players, the sheer array of ultimate throws can be overwhelming. A disc is capable of many more variations in flight path than a ball, and beginners may not know what they can or should be th...
0
Average User Rating
0 votes
Was this article useful?
Your Rating: 0
Submit